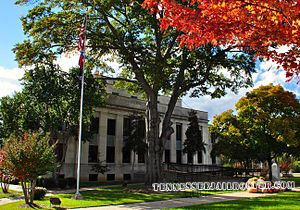 The Selmer Police Department is a full-service, accredited law enforcement agency located in Tennessee. The department has 3 main divisions: patrol, narcotics, and investigations. The patrol division is responsible for enforcing laws and ordinances, traffic control, and providing conflict resolution to community members. The narcotics division is made up of officers and K9 officers who locate drugs and work to remove them from the streets of the town. The criminal investigations division is responsible for conducting investigations on crimes committed within city limits. These officers work to collect evidence, apprehend suspects, and prepare cases for prosecution. All officers employed with the department maintain compliance with the Tennessee Police Officer Standards of Training Commission. The department does annual training in fields such as narcotics detection and enforcement and computer forensics.

Selmer is a town in and the county seat of McNairy County, located in southern Tennessee. Selmer covers a total of 9.57 square miles and has a population of 4,341. The town was incorporated in 1901. There are currently 33 registered sex offenders residing in the town.

Selmer has a Board of Mayor and Aldermen as the form of local government. There are 5 aldermen and a mayor. The current mayor is Sherry L. Inman.

Public records are available through the Selmer Town Recorder’s Office. Record requests must be submitted in person. Proof of Tennessee residency is required when submitting the request. The town recorder is currently Ann E. Henderson. The recorder has 7 business days to respond to the request.

Police records are available through the Selmer Police Department’s administration unit. Record requests must be submitted in person. Incident, accident, arrest, and offense reports are available 3 to 5 business days after the investigation is closed.

The McNairy County Sheriff’s Office is a law enforcement agency located in Selmer, Tennessee. The office is responsible for providing law enforcement, overseeing the County Jail, securing the courts and serving warrants and civil processes papers.

All criminal warrant information is released in person only at the Sheriff’s Office.

The McNairy County Sheriff’s Office does not have a most wanted list at this time.