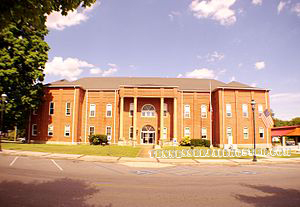 The Bledsoe County Jail is a medium-security facility located in Tennessee. The jail houses inmates charged with misdemeanor and felony crimes. Inmates being held are either awaiting trial or serving out their sentence.

All mail sent to inmates is searched before being given to the inmate. Mail can be sent to:

Visitation is based on what unit the inmate is being held in. An inmate is allowed up to 4 visitors at 1 time. Each visit lasts for 30 minutes.

Bledsoe County is located in central Tennessee. The county covers a total of 407 square miles and has a population of 14,913. The county seat is Pikeville.

Public records are available through the Bledsoe County Government. Record requests must be submitted in writing. Once received, the county has 7 business days to respond to the request.

Record requests can be sent to: